Guess who has two thumbs and can check “being hospitalized in a foreign country” off her bucket list!… THIS GAL!

Yeeeesss ma’am — yours truly got a real up-close-and-personal look at Spain’s health care system (’twas very nice, 10/10 would recommend) and I got to practice some of my Spanish medical terminologies along the way. A WIN-WIN IN MY BOOK!!

In the spirit of being a good lil study abroad adventurer, I figured the best way to process the crazy events of my life from the past week would be, of course, to blog about it.

So here’s the story about the time my body decided to throw a coup d’etat against my health and general well being during my time in Bilbao, Spain.

The Tonsil Take Over

The full story starts earlier this semester, in February 2018, when initial plans for the seizing of power began… it was then that the first signs of tonsillar destruction arose. The first historic battle (illness) was quickly followed by two more instances of full-on attacks involving sickness, sore throats, and general health deterioration… all of which ultimately led to the unforgettable and final round of The Tonsil Take Over™. AKA when my tonsils decided to stage a huge uprising against my health and thought it’d be cool to stop functioning like normal tonsils altogether… how rude, amiright??

The Clinic’s Most Loyal Customer

Throughout the duration of The Tonsil Take Over™, I became a frequent attendee of one of Bilbao’s finest clinics and probably earned the title of Most Loyal Customer (not the best title to earn, I know, but I’ll take what I can get). 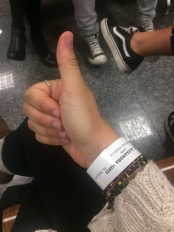 Over the course of 3 months, I got tonsillitis 3 times, which tbh is just about as fun as it sounds (i.e. not fun at all). Darn my immune system for its inability to function on minimal sleep, lots of exposure to airport-germs, and insufficient amounts of water!!!!

(Moral of the story = take care of ur selves, kids. Turns out, human beans are fragile lil things not unlike house plants… gotta feed, water, and nurture them with care. Who knew????).

Then Everything Changed When The Fire Nation Attacked

My poor immune system finally gave in when Tonsilitis Round 3 swooped in for the kill. A late spring day in April filled with very little sleep, lots of travel, and rainy weather ended up being the perfect recipe for my tonsils to officially decide it was time to rage quit.

Round 3 of The Tonsil Take Over™ started like the others… sniffles, scratchy throat, and exhaustion. So naturally, the usual retaliation tactics were used in battle to ward off the enemy…

Methods used included a trip to my favorite clinic, some new antibiotics, and 3 full days of wallowing in self-pity and pain in my little Spanish flat. With these methods, things should’ve been getting better, but au contraire Pierre… they, in fact, appeared to be getting progressively worse.

So I did what any well-trained soldier of combat and battle did in a time of need: I called my mom.

After some (ahem, many) dramatic tears and a decent amount of complaining later, I was able to formulate some semblance of a game plan thanks to the help of two worried parents, two lovely flatmates, one blessing of a Spanish fairy-godmother, and lots of phone calls to the International SOS hotline.

In a blur of Spanish-speaking nurses and a hospital transfer, I was ultimately diagnosed with a peritonsillar abscess. This led to being admitted to the hospital and was followed by a thrilling evening of getting my throat sliced up by an on-site ENT who spoke zero English, but was very good at her job and made the pain and suffering go away almost instantly, gawd bless her. (Also shout out to my mother who served as translator extraordinaire for me via phone call. Bilingual moms are the best).

I proceeded to spend the weekend under the careful eye of kind nurses; resting, practicing my Spanish hospital vocab, and catching up on the newest season of Brooklyn Nine-Nine. 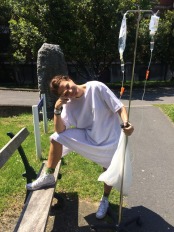 A 3-day stay in the hospital seemed to do the trick and I was released with new antibiotics in hand and strict instructions to “take it easy” upon returning to my normal Lexie-shenanigans.

As much as I’d like to say this war is officially history, I cannot declare victory just yet. This particular battle may have been won, but the true war continues on as my tonsils remain fully intact, plotting their next ruthless attack (ughhh they are the wooooorst).

So, TEXAS FRIENDS! I need your help! If you’ve got any inside scoop on the tonsillectomy scene in the DFW area and have recommendations for a stellar ENT doctor, please do drop this girl a line. As much as I love these tiny tonsils of mine (I don’t, they suck), they simply must go. The war-ending battle against these devious little dudes is underway… and when I return to Texas, the poor boys have no idea what’s comin’ for ’em. ✂️

Stories To Read Next